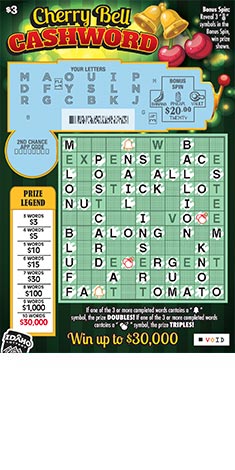 Cha-ching, ching, ching!  That’s the sound of gold coins falling and you winning the top prize of $30,000 when you play Cherry Bell Cashword!  This classic Cashword game features all the bells and whistles, just without the sound effects, and offers players a lot of fun and excitement, plus unique ways to win on every ticket!

There’s even a bonus spin located under the three 7s next to the YOUR LETTERS area.  Scratch those sevens.  If you reveal three “PINEAPPLE” symbols in the Bonus Spin, win prize shown instantly.

Cherry Bell Cashword is the players choice for extended playing fun, entertainment and winning – all the way up to $30,000!

*Prizes are updated once daily. Prizes below $25 are not available.