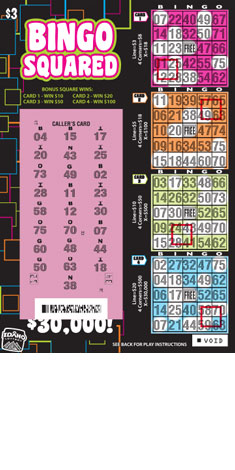 The bright, neon colors of Bingo Squared are reminiscent of the classic 1980s video games, but do not be mistaken, this game provides a lot of play, a lot of fun, for just $3.  Bingo Squared features four different, individual game cards, plus a redline BINGO SQUARE in each game to instantly win up to $100.  The game even features two prizes of $30,000!

This game is straight forward and plays like a traditional bingo game.  Players scratch the CALLER’S CARD area under the neon squares to reveal twenty-five BINGO numbers. Then, you scratch the corresponding numbers on each of the four play CARDS, every time you match a number.  If on any one of the CARDS 1 through 4 you match all numbers in one complete horizontal, vertical, or diagonal line, or four corners, or an “X”, you win the prize in the prize legend corresponding to that numbered CARD.  If on any one of the CARDS 1-4 you match all numbers in the BINGO SQUARE, you win the prize from the BINGO SQUARE prize legend corresponding to that card found under the game headline.