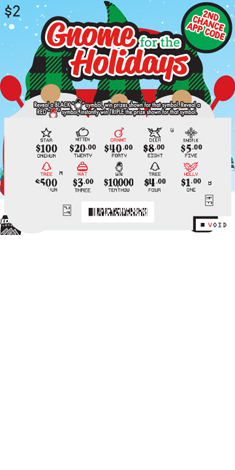 No matter how far away you roam, no matter what retail store you visit in Idaho, there’s just no place like Gnome for the Holidays and your chance to win up to $10,000!  The game features three erstwhile Gnomes with plaid flannel caps, driving their car in a snowstorm with ten presents attached to the grill.  Those are your ten chances to win the game’s top prize of $10,000.

This holiday season, you just can’t beat Gnome sweet Gnome, so lay Gnome for the Holidays and you could be our next big winner!

There are two things synonymous with the first snowfall of winter: building a snowman and a good ol’ fashioned snowball fight.  But who would have ever thought that a snowball fight could win your Lottery players an extra $1,000 this winter? That’s enough to make any holiday merry and bright.

Every non-winning, 2020 Idaho Lottery holiday-themed Scratch ticket has a second chance app code hidden in the play area.  The code can only be used through the Idaho Lottery’s VIP Club web portals.  Players enter the code for their chance to win one of five, $1,000 second chance prizes. This promotion begins on October 5, 2020 and runs until January 31, 2021.