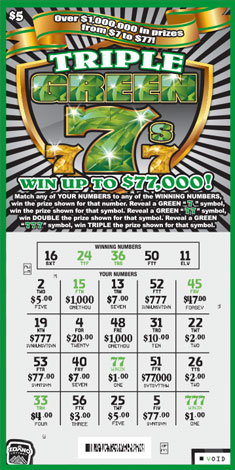 Green is definitely the color of money and there is no number luckier than seven. So, what do you get when you put the two together? One golden playing experience. Sparkling, glistening, and emerald encrusted 7s adorn every ticket on Triple Green 7s, the game that features a top prize of $77,000 and comes loaded with a million dollars in $7 to $77 winners!

There’s so much green, you’ll think you’ve won gold when you play Triple Green 7s and claim the top prize of $77,000!