January 9, 2009 - Boise - Gregg Owen left for the Ridley's Food store in Buhl the day before Thanksgiving with a grocery list from his wife Cathie that included all the trimmings for a holiday dinner, plus what turned out to be two very important items.

"At the bottom of the list it said 2 Raffle tickets," said Owen. "She gave me the $20 to get two tickets, so I stopped and picked them up. It was the best $20 investment we've made."

Gregg and Cathie Owen were the winners in the 2008 edition of the Idaho Lottery's $1,000,000 Raffle. Their winning number, 102,813, was selected on Tuesday night, December 30, 2008 from a pool of 250,000 tickets. The couple, life long residents of Buhl and the Magic Valley, arrived late on New Year's Eve at Lottery Headquarters in Boise to claim their prize.

"We had two sequential tickets," explained Connie, who works in Twin Falls as a Medical Assistant for St. Luke's. "When I checked the numbers online at about 10:30 p.m. Tuesday night, I read the first ticket - 102,812 and couldn't believe we'd missed the big jackpot by just one number. That's when I looked at the second ticket and realized we had the next one in order, number 102,813."

"There was a lot of excited screaming and hollering in the house," added Gregg, an employee of Clear Springs Foods. "I just stared at the computer screen and couldn't believe it. We must have checked those numbers a thousand times in a lot of different places to be sure."

"I didn't see the announcement show for the winning numbers, but I watched the video of it on the internet over and over and each time the final number ended with our ticket number," confessed Cathie.

The excited couple did not have any immediate plans for their winnings, other than paying for their sons' college tuition over the next couple of years and perhaps adding a gate on the lane leading to their house. Wisely, the Owen family was planning on meeting with an accountant and financial advisor to discuss their options.

The Owen family becomes the Idaho Lottery's 21st millionaire since the Lottery began in 1989 and the second largest winner from the Magic Valley area. And while the unexpected big win was sinking in for the Owen family, only one other of the top prizes had been claimed by late on Wednesday afternoon. Ramiro Heredia of Caldwell claimed $15,000. The remaining $15,000 prize winners, one each from Ada, Clark, and Kootenai Counties remain unclaimed.

All players, including those who won $300 and $100, have until June 28, 2009 to claim their prizes. Those prizes can be claimed at any Idaho Lottery retail location. The remaining $15,000 prizes must be claimed at Lottery Headquarters in Boise. 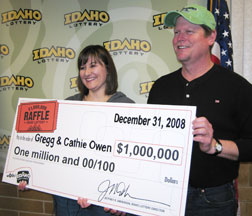