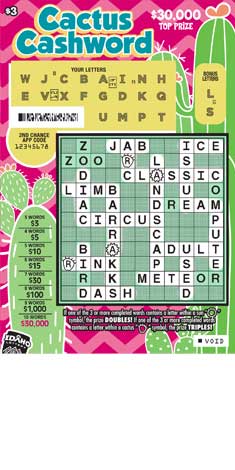 There’s nothing prickly about this cuddly cactus scratch game, especially if you win the game’s top prize of $30,000! Spring is in the air and that means the desert will be in bloom…blooming with cash prizes! This brightly colored Scratch Game is decorated with budding Saguaro and Prickly Pear Cacti that are certain to bring extra luck.

Break out the suntan lotion, take a trip to the desert in bloom, and play Cactus Cashword for your chance win up to $30,000!