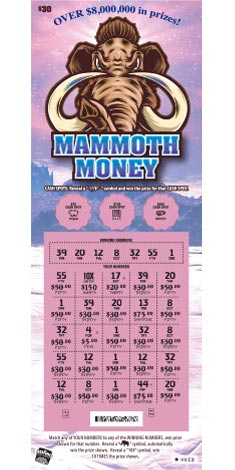 There’s wildlife afoot in Idaho that’s let loose from the ice age and it’s stomping its way to a retail store near you.  Big, bold, and carrying lots of cash, Mammoth Money features a massive Wooly Mammoth on the ticket art and a top prize of $300,000.  That’s a lot of cash; a mammoth pile of it.

In total, this game features mammoth amounts of prizes and winnings, with over $8,000,000 up for grabs.

Winning this game’s top prize will move you from the ice age to the modern era.  So, be on the hunt for your Wooly Mammoth and play Mammoth Money from the Idaho Lottery. The really “big game” Scratch Game, with a mammoth sized top prize of $300,000!