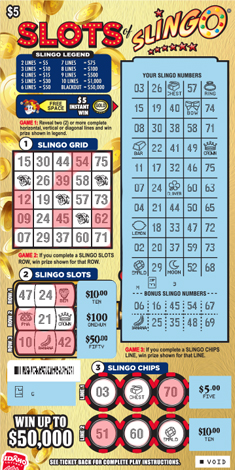 How much more fun could you have playing Slingo?  How about Slots of Slingo!  It’s your favorite game emblazoned all in gold and complete with a Slingo grid game, a Slingo slots game, and Slingo chips.  Even better, you could win the game’s top prize of $50,000 with a blackout on your Slingo grid.  It just doesn’t get any better playing Slingo than this.

Start your game by scratching YOUR SLINGO NUMBERS in the play are on the right. They’re under all the usual bells, fruit and sevens.  And make sure to scratch the BONUS SLINGO NUMBERS under the large golden coins, too.  Then, you scratch all the corresponding numbers on the SLINGO GRID area. If you reveal two (2) or more complete horizontal, vertical, or diagonal lines in the Game 1 Slingo Grid, you win the prize shown in the Slingo legend at the top of your ticket. Slingo character is always a free space and any GOLD COIN is an instant $5 win.

So much play, so many prizes.  It’s even slots of fun. Give Slots of Slingo a try and you could be Idaho’s next big winner, all the way up to $50,000!