January 4, 2011 - Boise - A couple of days prior to buying an Idaho $1,000,000 Raffle ticket, Hilda Floyd thought she had a $25,000 winning lottery scratch ticket. She received the ticket from a friend, scratched it, saw she won $25,000 and quickly signed the back of her ticket and was taking her friend to dinner before realizing she'd been given one of those phony, joke tickets./p>

"I was excited, I was whooping and hollering until I realized the whole thing was just a joke," described Floyd stoically on the 'pretend' winning experience she'd had earlier in December. "When I found out I won the raffle, well, I was much more cautious about my excitement."

The friend who encouraged her to buy her Raffle ticket called Floyd during the evening on December 29th to check the ticket to see if it was a winner.

"I read my number off and she told me I'd won," said Floyd. "After what had happened before, I simply did not believe it. Then I saw the number on the 10 o'clock news and again the next morning in the paper. So maybe I did win."

Even after calling her accountant to work out the details of her win, Floyd remained calm and not too excited to claim her big prize. That is until she started describing her plans for her windfall.

And that is no joke.

The Maverik Country Store on Karcher Road in Nampa where Floyd bought her winning ticket is no stranger to big winning tickets. In fact, it is quickly gaining a reputation as being one of the luckiest stores in Idaho. In February 2008 the store sold a $200,000 winning Powerball ticket and then five weeks later sold a Powerball ticket worth $600,000. For their part in selling the winning ticket, Maverik will receive a bonus from the Idaho Lottery of $20,000. 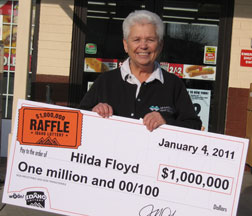