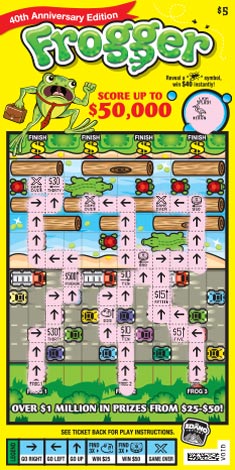 Leaping back into stores this spring is one of the most popular Scratch GamesTM ever offered by the Idaho Lottery. Frogger will be leaping from the lily pads, across the roads, through the parking lots and into tickets dispensers starting in mid-February.

Just like its predecessors, the Lottery version of the popular 1980’s arcade game plays true to the timeless arcade version, only without the joystick, arcade music, and sound effects.  Of course, the trade-off is a game filled with prizes from $5 to the top prize of $50,000.  The game also offers over $1 million in prizes from $25 to $50!

All non-winning tickets may be entered for a second chance to win a weekly prize of $100!  But true video gamers will have their opportunity to show their skill and win weekly prizes by playing Frogger online.  That’s right, the Scratch Game will offer a free interactive website game with age-controlled parameters and a Leaderboard.  The Leaderboard will be used once every week the Scratch Game is on sale to determine a weekly winner.  Participants play Frogger, a game of skill, through the Lottery’s website and the top-ranking player on the leader board each Wednesday wins a Frogger prize pack that includes a Frogger umbrella and Frogger scratch tickets. Prize pack value is approximately $50.

To get to the online game, scan the QR Code on the back of the Scratch Game ticket to download the free interactive Frogger game to a smartphone or tablet.

Frogger the Scratch Game leaps back into stores in mid-February with all the fun and excitement of the classic arcade game, just be sure to use a lucky scratcher instead of a joystick to try and win cash prizes!

*Data on prizes below $25 are not available. Prizes updated nightly.