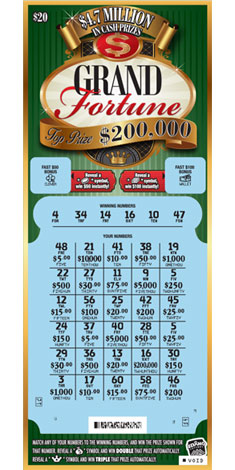 There are fortunes and then there are grand fortunes. Grand Fortune, the Scratch Game, lives up to its billing. The game features $4.7 million in cash prizes and is loaded with $200 prizes. There are twenty-seven ways to win and best of all, the game has a top prize of $200,000!

It’s Grand Fortune, with a top prize worthy of royalty, especially when you win the top prize of $200,000. And when you claim that prize, you might even feel like wearing a crown.