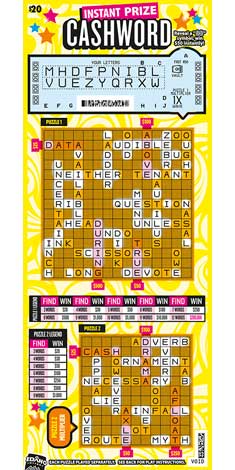 How many Cashword games from the Idaho Lottery let you win by uncovering just one word? Well, this one does. Instant Prize Cashword has a unique twist to the traditional Cashword games you know and love. There’s so much excitement playing this game, it’s sure to become an instant classic for Cashword players.

Start by scratching the FAST $50 spot. Reveal a “DOLLAR SIGN” symbol, win $50 instantly! (Note: FAST $50 does not multiply). In the game, players scratch the YOUR LETTERS box to reveal your 18 letters. Then, players scratch the corresponding letters on PUZZLE 1 and PUZZLE 2 – both puzzles are played separately. If you uncover at least three (3) or more completed words in either PUZZLE 1 or PUZZLE 2 (not combined), you win the PRIZE shown in the corresponding PRIZE LEGEND. If you uncover any one pink INSTANT PRIZE word in either puzzle, you win the PRIZE shown for the word. If you win in PUZZLE 1 or PUZZLE 2, scratch the corresponding MULTIPLIER. Multiply your prize won for that PUZZLE by the amount revealed in the MULTIPLIER bubble.