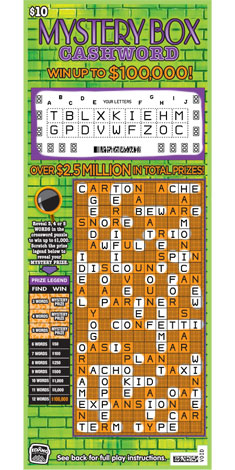 Could $100,000 be hiding under the clues on Mystery Box Cashword? Put on your Sherlock Holmes’ deerstalker hat, grab a magnifying glass, and set out to unravel the conundrum behind of the Mystery Box Cashword. This could be the most fun sleuth game of all time!

In the game, players scratch 18 of YOUR LETTERS hidden under the fingerprints. Players then match each letter to every occurrence of that letter in the puzzle. If you uncover at least three complete words in the puzzle, you win. For extra sleuthing skills, players who uncover three, four, or five complete words scratch the corresponding Mystery Prize spot in the prize legend. You could win up to $1,000 instantly! If you uncover 12 words in the puzzle, you win the game’s top prize of $100,000!