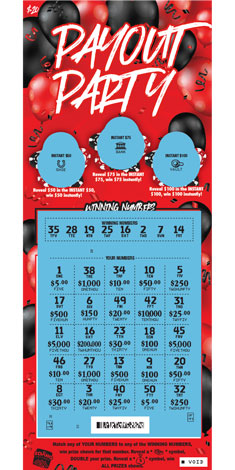 For the main portion of the game, players identify their WINNING NUMBERS by scratching the eight aces to reveal them. These numbers are then matched to YOUR NUMBERS under the 25 black and red chips. If your numbers match, then you win the prize for that number. If you reveal a “stack of money” symbol, you win double your prize. If you reveal a “money bag symbol” you win all the prizes on the ticket.

With 28 ways to win, red and black balloons and streamers, you’re sure to have a party playing this game. And when you win the game’s top prize of $200,000? That’ll definitely be a payout party!