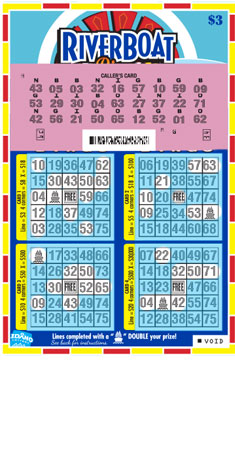 Riverboats.  The timeless transportation method for the rivers of America in the 19th and early 20th Centuries.  Their sternwheelers paddling, their smokestack billowing, as the large flat-bottom boats slide effortlessly past the tree lined shores, Riverboats evoke an iconic image of an age long passed, where the rivers and the boats connected a burgeoning American frontier.  To pass the time on the voyages along through the Mississippi and Ohio River Valleys, passengers would frequently engage in games of chance.  Riverboat Bingo echoes this nostalgic spirit, especially with a top prize of $30,000.

Playing Riverboat Bingo is straight forward and plays like a traditional bingo game.  Players scratch the CALLER’S CARD area dollar signs to reveal twenty-seven BINGO numbers.  Then, you scratch the corresponding numbers on each of the four play CARDS, every time you match a number.  If on any one of the CARDS 1 through 4 you match all numbers in one complete horizontal, vertical, or diagonal line, or four corners, or an “X”, you win the prize in the prize legend corresponding to that numbered CARD.  Lines completed with a “Riverboat” symbol double your prize!

Pass the time as they may have in days gone by, playing Riverboat Bingo for your chance to win a top prize of $30,000!

*Prizes are updated once daily. Prizes below $25 are not available.